Searching for Surfers in Hawaii 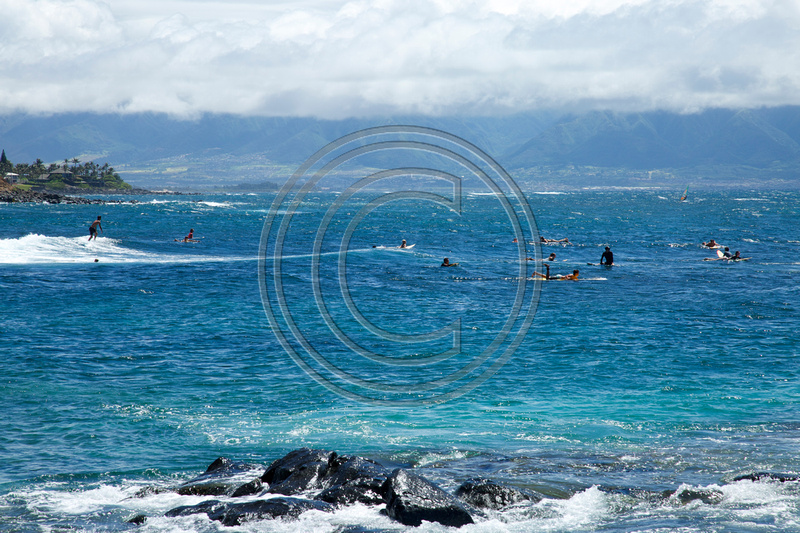 I think my love of surfing and surfers started back when I was a pre-teen.  My family used to go to Nags Head, North Carolina each summer for vacation.  We drove in our Buick Electra 225 listening to the Beach Boys the whole way there AND back.  How my father listened to three little girls belting out the Best of the Beach Boys for 10 hours is a wonder!  I fell in love with the idea of surfing and surfers listening to those songs.   While in Nags Head there were plenty of surfers to watch!

Now I love to photograph surfers at any surfing area I get to; LBI in NJ, Dana Point, Cali and now Hawaii.  I can stand on the beach for hours waiting with them for the perfect wave.  Surfing is actually my favorite sport to photograph.  I love the whole surf culture.  Hanging on the beach, the serenity of waiting on the wave and staring at the ocean, the exhilaration of (getting the shot) catching the perfect wave,  The surfer Zen philosophy of life, ALL OF IT.   I haven't photographed any surfers I know, but I have this vested interest in capturing the greatest ride or trick of each surfer I photograph.   I recently took surf lessons while vacationing in Hawaii.  I can say I have an entirely new appreciation for good surfers!  While I did manage to stand up and catch a few waves, it didn't look anything like the surfers I have photographed over the years.

I was really hoping to photograph some professional surfers while in Hawaii, but ironically summer is not the high season in Hawaii and the pros were on tour elsewhere.  I made my family stop at beaches along our routes on every island we visited so that I could check for surfers!  In Kauai, we stopped at a state park beach with a dedication to the professional surfer Andy Irons, who suffered from depression and committed suicide in 2010.  The surroundings were beautiful and there had been a bonfire on the beach for the 4th of July. We stopped at another state park beach called Hookipa, in Maui, just down the road from the famous "Momma's Fish House" with a lot of novice surfers and a few windsurfers.  I even insisted we drive out to the viewing point for "JAWS" in Maui, just to see it!  JAWS is famous among surfers for big waves.  Every year Billabong hosts a surf competition in February and the surfer catching the biggest wave gets $1,000 per foot of the biggest wave surfed.  Last year the winner received $82,000!!  The "road", and I use that term loosely, to the viewing point is not marked.  I stopped in the "Jaws General Store" to see if I could get directions.  The girl behind the counter explained where to leave the main road, but said the rest was unpaved and "pretty gnarly."  Her description was accurate!  Luckily we had a Jeep Wrangler 4x4 or we would have been swallowed up by the craters in the dirt path.  Surrounded on either side by overgrown sugar cane, bouncing like we were on an amusement park ride, I'm sure my family will say that they thought I was nuts!  The trip was worth it though!  The view was SPECTACULAR despite the fact that without surfers to give perspective you cannot judge the height of the waves.  The view from the cliff overlooking the ocean could literally take your breath away.  I could imagine the photographers camped out to get the best shot from above, let alone the photographers riding the wave runners trying to get the shots in the middle of the action.

Although it seemed there were novice surfers everywhere we stopped, I eventually did catch some local surfers that were really good and one day there were 10-12 foot waves!  The locals come to the beach with their friends and dogs who hang out while they surf.  At the state park beaches there are barbecue grills and some have covered areas.  Families and friends come and hang out for the day or have celebrations on the beach, we saw more than a few bounce houses set up at the parks.  I also caught two brothers from LA, who were jumping off a cliff at a beach where I was photographing surfers.   I hope you enjoy these photos of my adventures and the surfers trying to catch the perfect wave.

Hope all is well!
Carl Thomas(non-registered)
Great photos! I never noticed before how important arms are to surfing. Their arms are so expressive in these photos! (e.g., the one with the guy in the white shirt) They not only seem to be important in balance, but also in steering. Sort of like the role the tail of a hawk plays in soaring.
Henry Schlegel(non-registered)
Truly awesome photography! You should try other sports too. How about alpine skiing - extreme and non extreme. Thanks for sharing.
Danielle Miller(non-registered)
Love the pictures Kerry!!! I hope to get back to Hawaii someday. Such a beautiful place and you did a great job capturing it.
Carey(non-registered)
Spectacular! Love the brothers diving shot. The Cozzolino family are troopers for being a huge part of your artistic expression my dear Kerry.
No comments posted.
Loading...
Subscribe
RSS
Keywords
basketball 2020 family joy smiles sports Special Olympics fans hockey ice hockey
©2016-2022 Kerry Cozzolino Photography LLC
Powered by ZENFOLIO User Agreement
Cancel
Continue